McGraw Hill’s decision to trash copies of its textbook Global Politics: Engaging a Complex World  has been subjected to intense criticism on web sites propagating the “Palestinian Narrative” of the 100 years old Arab-Jewish conflict. The “Palestinian Narrative” is a concoction of lies and half-truths based on the 1964 PLO National Charter – as amended in 1968 – and the 1988 Hamas Covenant.

Catherine Mathis – a spokeswoman for McGraw-Hill – explained the Company’s reasons for destroying the textbook – which contained four misleading and inaccurate maps of “Palestine”:


"As soon as we learned about the concerns with it, we placed sales of the book on hold and immediately initiated an academic review. The review determined that the map did not meet our academic standards. We have informed the authors and we are no longer selling the book. All existing inventory will be destroyed. We apologize and will refund payment to anyone who returns the book."


Host Kate Snow and her then guest Middle East expert Martin Fletcher made a return appearance to acknowledge that they realized after they went off the air that the maps were not factually accurate and they regretted using them.


Now, Jewish Voice for Peace (JVP) has published a letter signed by 35 “prominent academics” attacking McGraw Hill’s “shocking and outrageous act of censorship of the Palestinian narrative from US schoolbooks”.

The fact that JVP openly acknowledges the offending maps are part of the “Palestinian narrative” is surely more than sufficient justification for trashing the text book – because no disclosure was made by the contributing editors that the maps they used were partisan in nature.

But the academics letter goes even further in claiming:


1. “The maps in question are historically accurate” – but gives no evidence to back up that claim.

2. “If there were in fact any minor errors with the maps they should have been corrected rather than removed altogether” – but fails to list such minor errors.

I then sent JVP my detailed reasons for questioning the accuracy of these four maps – adding:


“I know it would be very difficult to withdraw your letter signed by so many distinguished people but it needs to be qualified if their integrity and yours is to be maintained.

McGraw Publishing had the intellectual strength to remove the offending text book from sale when inaccuracies in the maps were brought to its attention.

I believe you now need to issue an appropriately worded supplementary letter that:

* errors appearing in the published maps drawn to your attention after your letter was published were regrettably incapable of being corrected thereby necessitating their withdrawal and the textbook from sale.

* McGraw Hill's decision to do so was justified.

Please give this letter your serious consideration and let me know what you intend doing.”

No response has been received to this and two subsequent e mails.

Misleading maps – like misleading statements – allowed to go unchallenged – soon become accepted as gospel truth if repeated often enough in text books and in the media.

Anti-Israel websites peddling the “Palestinian narrative” and refusing to publish comments seeking to correct unsubstantiated and untrue statements are increasing.

Jewish Voice For Peace does itself no credit in aligning with these insidious web sites by maintaining its deafening silence and knowingly propagating these totally discredited maps.


Note from Daphne: the MSNBC map shown below appears several times on the JVP Facebook page. 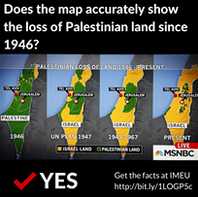 The comments below, like the signs in the photo of JVP activists above, are illustrative of the JVP's  outlook and agenda: click here for its sources of funding; (NGO Monitor has its measure) 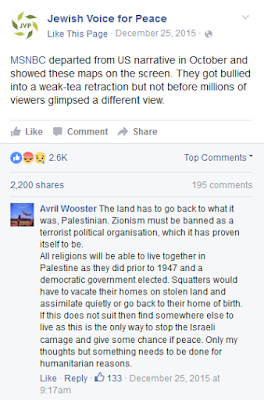