For the Love of Lucy: Sizer rallies his troops 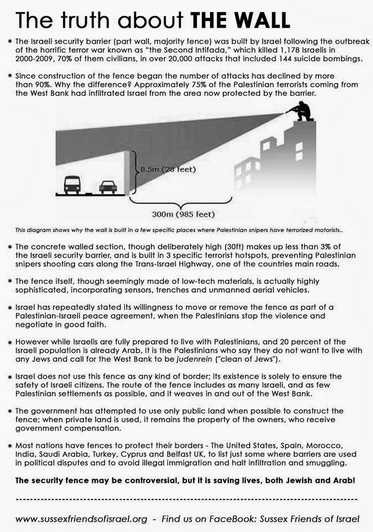 (At left: the truth about Israel's much maligned separation barrier, by Sussex Friends of Israel.)

If, over the next few days, the Bishop of London, the Right Reverend Richard Chartres, receives a slew of identical or near-identical letters commending the antisemitic stunt at St James's Piccadilly, and defending its rector (and chair of the Israel-bashing Amos Trust), the Rev. Lucy Winkett, who broke her silence by making this weak and wretched excuse for the church's conduct, the reason will be not far to seek.

Perhaps alarmed at the progress that the petition (see my previous post; go on, sign it!) deploring the Israel-demonising shenanegans of the Rev. Winkett, and her Piccadilly church, in alliance with their dodgy allies such as Interpal, seems to be making, along with press articles condemning St James's grubby stunt, our old chum the Rev. Stephen Sizer is urging his followers to send the good bishop a letter in the lady's defence. 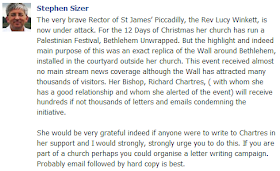 Ever-zealous in the anti-Israel cause, he's helpfully suggested what they should write: 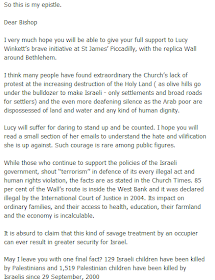 Among those quick to respond on Facebook to the vicar's rallying call is this lady:

Surely this is not the lady who back in 2007 reportedly sent an email as follows [emphasis added] to the JCI (Jewish Community Information) at the Board of Deputies:

You are worried about Dafur!!!!!!!!!!! Yet you have in a wonderful Nazi like killing machine (thousands of palestinians have died or are incarcerated in camps, including Gaza and the West Bank) backed by the world's richest jews and , you are joking about Darfur aren't you?

Whatever you say, and I don't want to hear what you have to say because it will be the same old rhetoric, we in the UK have had enough of Israel, we (the NUJ of which I am a member) have finally voted to boycott Israeli goods (I have been doing this since 1957 so it just legitimises it and spreads the word, all items with 7.29 in the bar code, Jaffa Carmel, etc) - universities will bring in an academic boycott and architects are now joining in too. It won't stop there, we will do all in our power to make sure that you do not take any more land (you have already taken mine and refuse to pay for it). We can no longer send money to the PLO or Hamas, but we are sending people, we are not afraid of your wall, your evil soldiers (and you worry about one missing soldier, ha!) and will continue. We used to be mild, respected you because of the so called holocaust (a nice round number 6 million, what about the homosexuals, gypsies, deformed, dissenters, they NEVER get a mention and my family were among them)

So yes, we are very angry, we are working against Israel whereas before we supported you, and we will do all in our collective power to make life as uncomfortable for you as you make it for the Palestinians, shame on you, shame on all jews, may your lives be cursed

Yours with no shame whatsoever and no fear

'Those arguing for a boycott seek to present themselves as opponents of Israeli government policy rather than antisemites. Yes, it should go without saying that it is perfectly possible to oppose the policies of the Israeli government without being antisemitic. I do it myself. And it is, at least in theory, perfectly possible even to be anti-Zionist and oppose the very existence of Israel without being an antisemite.

But do not be fooled about what is going on. Some of those supporting a boycott are clearly the ‘useful idiots’ of the antisemites; they are not themselves antisemitic but are too blinded with hatred for to realise the real nature of their allies. But it is - and I'll put it no stronger than this - quite remarkable how many of those who call for a boycott, on whatever grounds, turn out to be plain old antisemites.

.... Her email gives the game away, exposing how much of the support for a boycott is suffused with antisemitism, pure and simple.

Ms Hardyment’s sentiments are representative of the underlying views of many boycott supporters. The references to the “Nazi like killing machinea¦ backed by the world's richest jews and America”, the “so called holocaust (a nice round number 6 milliona¦)” and “shame on all jews, may your lives be cursed”, may be more obvious than some of the more sly proponents of a boycott, who are careful to couch their arguments in apparently reasonable language; but antisemitism is antisemitism, whatever the tone in which it is expressed.'